I was elated that the show decided to include a writer in the lineup and I caught up with Ashley before and after the show to discuss her take on the evening.

Poetry and podcasting may seem like two totally different worlds, but Ashley says they have more in common than you think.

“I think they are similar in that they hold big topics in relatively small spaces, and they both rely on the sound of words to communicate ideas in a spicier way than, say, the evening news,” she said.

Ashley opened the show reading, “Riddled in the Heart of Dixie” a poem from her debut collection Magic City Gospel.

She then sat down for an interview with Gene and Shereen of Code Switch. Ashley has often said that Magic City Gospel is a sort of love letter to Birmingham, though she admits that Birmingham, with its racial tensions and turmoil of the past and present, can be a tough city to love. In fact, growing up she couldn’t wait to leave. But after leaving to attend graduate school in Miami she realized that Birmingham is a city rich with culture and full of hope. Ashley came back to show appreciation for all that Birmingham is and to work hard to bring to fruition all she hopes Birmingham one day can be.

Gene asked Ashley what she thinks people outside of the South get wrong about this region and she voiced frustration with people who pretend racism only exists here.

“I was happy to be asked about the South’s representation because I’m very passionate about how we’re seen nationwide,” Ashley told me after last night’s event. “It’s so easy to make the South a scapegoat for all the wrongs in our nation, and being able to speak out about the reality of race, class, and economics in the South and in the US on a national program was wonderful. I hope listeners across the country hear this episode and think twice about how their communities, not just the South, contribute to the deep-seeded issues our country faces.”

Some folks say that discussing Birmingham’s past holds the city back, an issue Ashley was also asked about during her interview. Her reply: “That doesn’t make sense to me!”

Ashley declared that the only way we’re going to move forward is to look back and learn from our past to make sure we don’t repeat the same mistakes.

After serving us with another poem — “Viewing a KKK Uniform at the Civil Rights Institute” — Ashley left the stage to make room for Mayor Randall Woodfin.

“I appreciated the hosts pushing the mayor to speak on more controversial topics than what he might encounter in a run-of-the-mill TV interview,” Ashley said.

Gene and Shereen asked the mayor about everything from immigration and gentrification to his favorite local restaurant, which is Yo Mama’s, and  whether he roots for Auburn or Alabama, to which he replied, “Roll Tide!”

While Mayor Woodfin skirted around the question about what he plans to do after leaving office he didn’t hold back when discussing his disapproval of President Donald Trump. He made clear that he disagrees with Trump’s immigration policies and assured immigration activists, advocates, and allies that the City of Birmingham would not be using its resources to “round up” undocumented immigrants. He also announced plans to make Birmingham a “Welcoming City,” one that would seek to support and improve the lives of local immigrants.

Mayor Woodfin’s pride for Birmingham beamed as he declared the city a symbol for reconciliation among races, but he acknowledged the Magic City has a long way to go. Decades after Jim Crow, Birmingham is still a highly segregated city and there are alarming economic and education disparities among Birmingham’s 99 neighborhoods. But Woodfin says his administration is committed to bringing about change.

At the end of the night audience members got to see “the sausage being made” as Gene and Shereen re-recorded lines.

“From a behind-the-scenes perspective, I’d never been a part of a production quite like that, and seeing it all come together was incredible,” Ashley said of this and her backstage experiences.

“By exposure, I mean that our city is put on a national stage for intellectual discussion instead of just being a city in the state from which Jeff Sessions came. Or insert any other polarizing, conservative kind of person or law or idea or image of fire hoses,” Ashley said. “We get to become a part of the present, rather than be mislabeled as a city whose impact only occurred in the past. We can be living and breathing and thinking and talking, now, in 2018 about race.”

Ashley hopes more events like Code Switch come to Birmingham and she believes Birmingham residents will be eager to support them.

“I think the community is hungry for these kinds of programs, and they show up en masse to see them,” she said. “I’m so grateful for this opportunity, and I hope my contribution made a positive impact on the show.”

One way to see more programs like this in Birmingham is to support WBHM. Find out how you can contribute here. 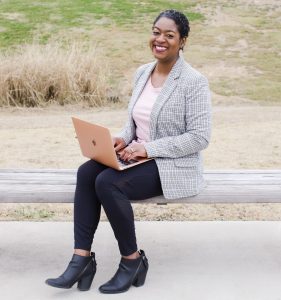