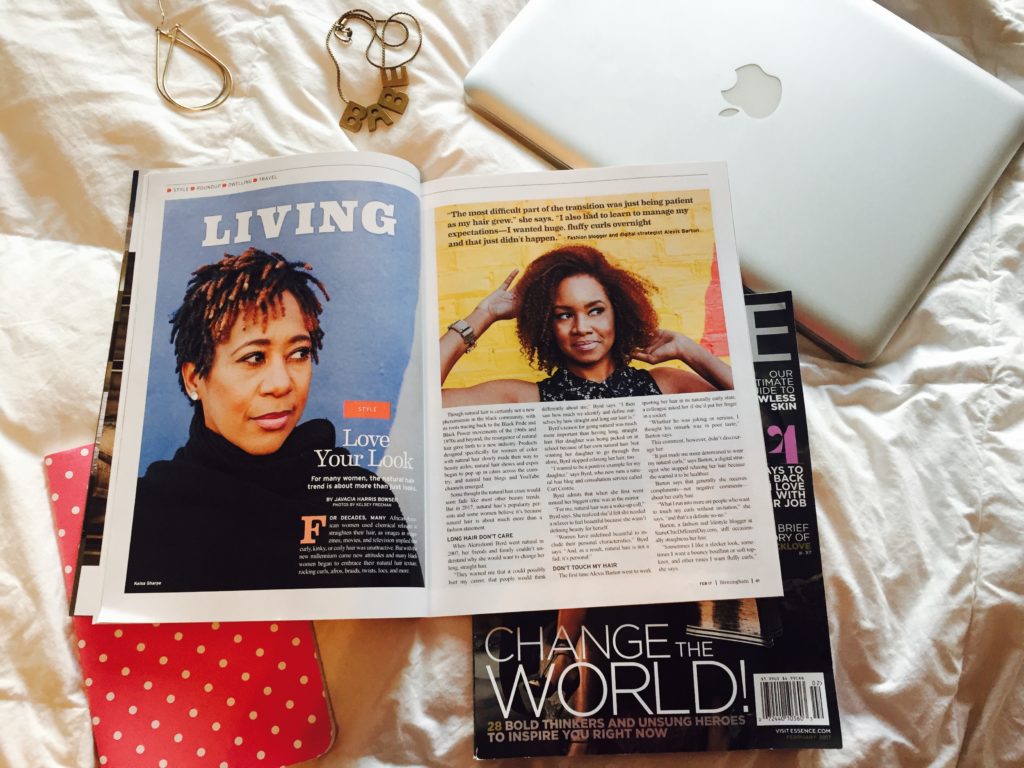 I recently had the honor of writing a feature story on natural hair for the February 2017 issue of Birmingham magazine. The women I interviewed for the article — Alexis Barton, Akirashanit Byrd, and Keisa Sharpe — each had a compelling hair story to share and I hope you’ll read.

With one interviewee, fashion blogger Alexis Barton, I discussed the debate on whether or not a woman can still call her hair “natural” even if she occasionally straightens it with a tool such as a flat iron. Barton says, “To each her own, but I consider my hair to be natural because it’s not chemically relaxed.” She stressed that we must remember that a black woman’s hair isn’t always a political statement and “For some people, it truly is just hair.”

Nonetheless, Barton does believe that going natural can be a journey toward self-acceptance. It certainly was for me and even thinking about if I should straighten my hair or not helped in this process.

Back in 2012 I wrote a guest post for CurlyNikki.com on how natural hair made me a better feminist, a realization I came to after contemplating this question about flat ironing my curly tresses straight. Let’s step back in time and take a look at the post… 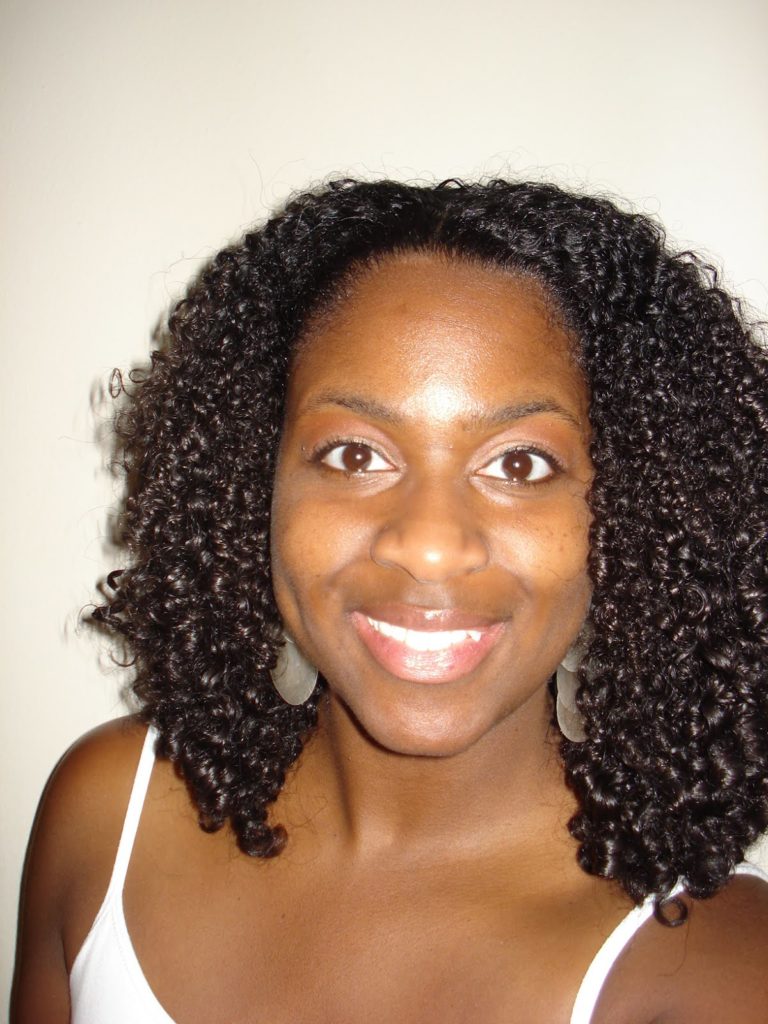 Even in 2012 the word “feminist” is still considered a dirty word by some. Quick vocabulary lesson: Merriam-Webster defines feminism as “the theory of the political, economic, and social equality of the sexes.” That’s it; there’s nothing there about emasculating men, for those who equate feminist with man-hater.

There’s also an assumption that feminists scoff at women who take pride in their appearance. I can’t speak for all feminists, obviously, but I am a girl who wants to look good. As a feminist, however, I try to always be thoughtful about the fashion and beauty choices that I make. Am I wearing these clothes and putting on this makeup because I truly want to or because I feel like I have to in order to be accepted or loved? Those are the kinds of questions I ask myself to keep my motives in check, but those are questions I didn’t start asking until I went natural. Let me explain.

One of the points of contention in the natural hair community is whether or not you can still call yourself natural if you occasionally flat iron your hair straight. Some say no. I understand the sentiment. It’s like being one of the X-Men but hiding your powers and the things that made you different from the rest of the world. (Sorry for that analogy; I’m a super hero nerd.) But I define being natural as not using caustic chemicals to permanently alter your hair texture. And when I straighten my hair a few times a year I use heat, not a relaxer, and my curls usually come peeking out in a few days because they love to be the center of attention.

But this debate did make me ask myself: “Why do you occasionally straighten your curls?”

When I was younger I got relaxers very infrequently so I’ve never had an addiction to the so-called creamy crack. Still I was obsessed with straight hair because I was taught that beautiful hair was straight hair. Period. So I constantly wrestled my curls into submission with the strongest hair appliances I could afford.

Then one summer day when I was 21 while on what was probably my third hour of doing my hair, my roommate at the time turned to me and said, “Maybe your hair doesn’t want to be straight. Why don’t you just wear it curly?” And something just clicked. Never before had anyone suggested that just letting my hair exist in its naturally curly state was an option. And with that I was free. I started wearing my hair curly and an amazing journey began. 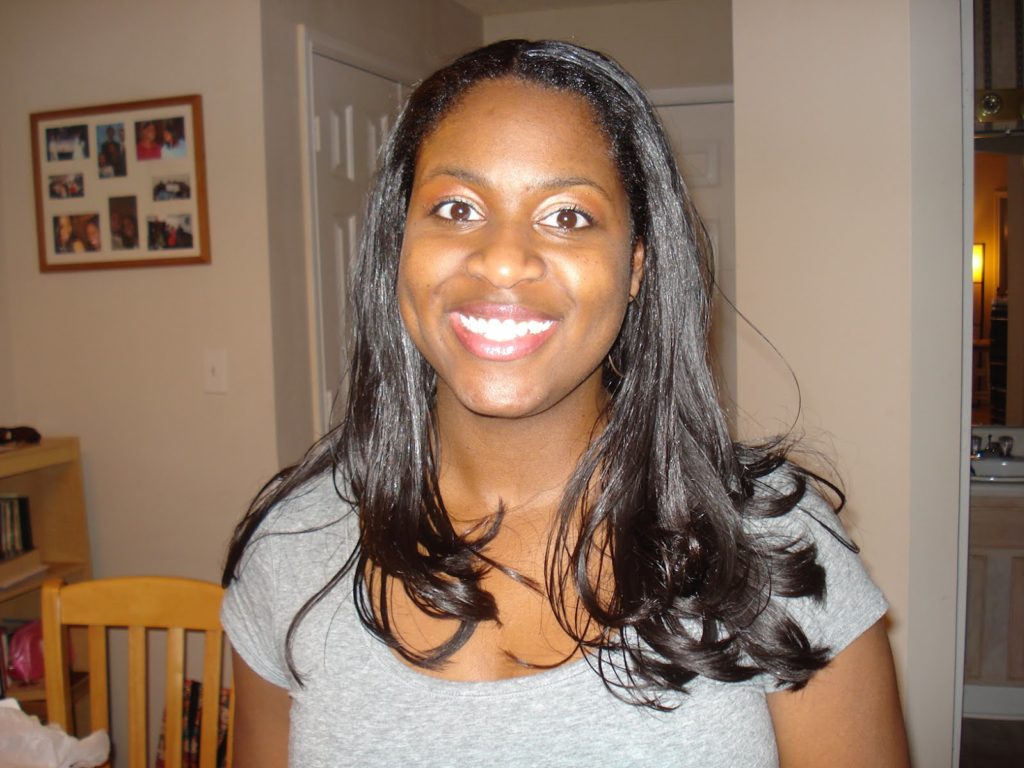 Because applying heat to my hair had been something that I did because I thought it was the only way to be beautiful, after going natural I didn’t use any heat, not even a blow dryer, on my hair for about three years. I needed time to heal.

So nowadays when I get my hair straightened, which I do about three times a year, I am sure to check myself. Why am I doing this? Is this coming from a dark place of self-hate as it did when I was younger? After some soul searching I was sure that it was not. When I straighten my hair these days it’s usually because I’m bored and want a different look for a couple of weeks or because I want to wear a cute hat that won’t fit over my curly coif.

Putting thought into why I wear my hair a certain way pushed me to be thoughtful about all my fashion and beauty choices, which is why I always say going natural made me a better feminist. 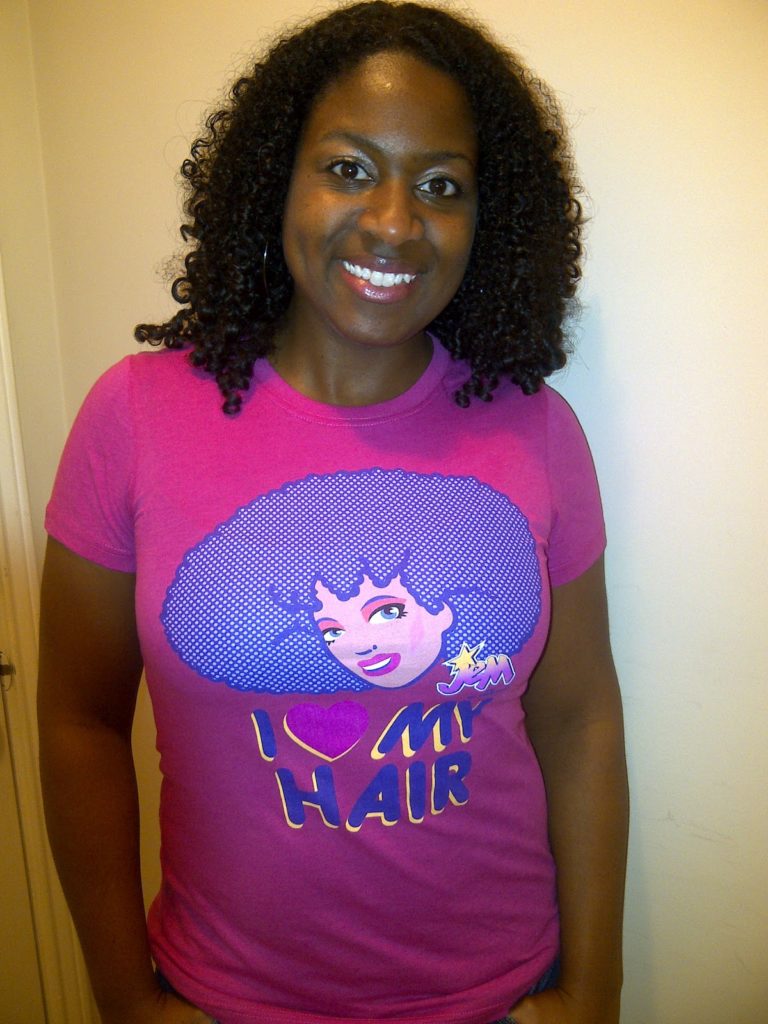 I think all women should be conscious of the motives behind their hair choices, even the choice to go natural.