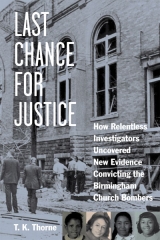 Here in Birmingham, residents and city officials all year have been  commemorating the events of the 1963 civil rights movement. The hope is that we will pave the path for a better future as we reflect on our past. 50 Years Forward has been the theme, the mantra, of the events held this year.

Thirty-seven years the bombing, the FBI reopened what some thought was a hopeless case.  In Last Chance for Justice,  Thorne gives readers an inside look into the investigation from the perspectives of police detective Sergeant Ben Herren and FBI Special Agent Bill Fleming.  Publisher’s Weekly says, “Thorne’s story is a stunning reminder of just how tough the fight for freedom—and justice—really is.”